Rapid-Fire Amplification beyond the Quantum Limit but without Quantum Resources 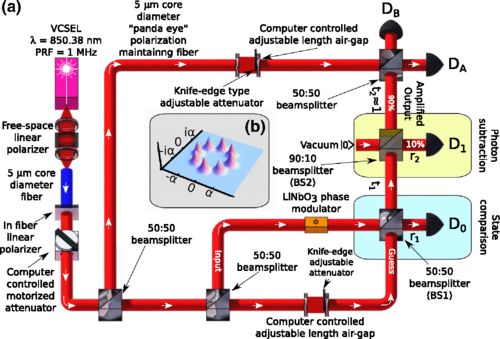 John Jeffers and recent CNQO PhD graduate Electra Eleftheriadou have recently published a paper on the State Comparison Amplifier in Physical Review Letters (PRL 114, 120505 (2015). The work was done in collaboration with Heriot-Watt and Glasgow Universities and the pioneering experiment was performed by Gerald Buller’s group at Heriot-Watt.

The device uses coherent states as a resource, which allows for a relatively simple light source, such as a diode laser, providing an increased rate of amplification. Most quantum amplifiers operating in this regime require difficult-to-produce quantum states of light such as single photons. Another feature of the system is that the amplifier is not restricted to low amplitude coherent states, making it useful for slightly higher gain applications.﻿