A team of researchers led by Prof. Paul McKenna have demonstrated that the diffraction of intense laser light passing through a relativistic plasma aperture self-generated in a thin target foil can be used to control the acceleration of protons. The work, which is published in Nature Communications this week ('﻿Towards optical polarization control of laser-driven proton acceleration in foils undergoing relativistic transparency', Gonzalez-Izquierdo et al), opens up a new route to actively controlling the intensity distribution of beams of high energy protons produced via intense laser-foil interactions. Such beams have wide potential applicability, including, for example, as relatively compact sources for proton oncology.

In a publication in Nature Physics ('Optically controlled dense current structures driven by relativistic plasma aperture-induced diffraction', Gonzalez-Izquierdo et al) earlier this year, the team demonstrated that an instantaneous 'relativistic plasma aperture' is generated in an otherwise opaque thin foil target at the focus of an intense laser pulse. The relativistic increase in the mass of the heated plasma electrons, decreases the plasma frequency in a localised region of the target, making it relativistically transparency over a diameter of a few times the laser wavelength. As the laser pulse passes through the resulting aperture it diffracts and the plasma electrons forming the aperture are in turn displaced by the resulting intense Fresnel diffraction pattern. This enables the spatial-intensity profile of the resulting beam of relativistic electrons to be controlled.

The new paper demonstrates the use of this scheme to control the electrostatic fields created by displacement of the electrons. It is these high fields (>TV/m) which accelerate ions to tens of MeV energies. It is shown that the measured proton beam profile is controllable by variation of the degree of ellipticity of the laser polarisation, which changes the Fresnel diffraction pattern. The scheme can also be used to control secondary high energy photon generation.

The experiment was performed using the Gemini laser at the Central Laser Facility, Rutherford Appleton Laboratory and the simulations were carried out using the ARCHIE-WeSt and ARCHER high performance computers. 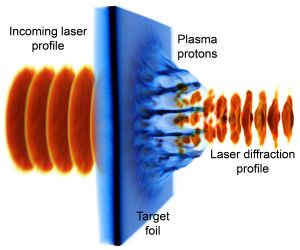