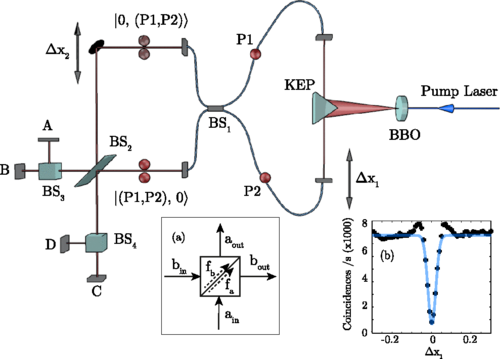 Loss (together with its evil twin decoherence) is the bane of quantum physics experiments. In quantum optics the random deletion of photons not only removes light but also ruins delicate quantum correlations. The ability to control loss would be useful.

A theoretical prediction made by John Jeffers in 2000 suggested that loss may not be so random after all. The phase of the optical mode matters. Thus a lossy optical medium can simultaneously be completely transparent to photons in the appropriate optical mode, but completely black to photons in another.

N00N states are quantum states that consist of N photons distributed over twin optical beams in a particular quantum way. All of the photons are in one beam, but which beam is not determined beforehand. The 2000 paper showed that these states of light are affected by loss in a nonlinear, nonrandom way depending on the phase difference between the two beams. For 2-photon N00N states it is possible to never absorb one photon, or definitely absorb one, depending on the phase. This removes a component of the randomness associated with loss. A measurement of the effect is reported in a recent paper in Physical Review Letters by John Jeffers and a team of researchers in the Optics Group at Glasgow University and the Extreme Light Group at Heriot-Watt University. The results could have significant applications in imaging.