Some types of quantum entanglement cannot be both monogamous and faithful 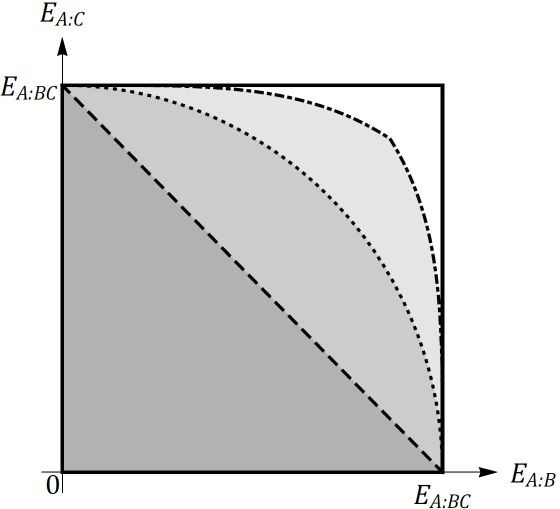 As might be expected, the terms “monogamous” and “faithful” mean something a little different in the quantum world than they do in everyday language. In a new paper, a collaboration of physicists and mathematicians have shown that, when quantified by some standard means, entanglement cannot be both monogamous and faithful at the same time. The results may be relevant when assessing the security of quantum cryptographic schemes, which rely on the monogamy of entanglement, and may also help to understand the long-standing “firewall debate” related to the behavior of black holes.

The researchers, Cécilia Lancien et al., at institutions in Spain, France, Switzerland, and the UK, have published a paper on the monogamy of entanglement in a recent issue of Physical Review Letters.

In general, monogamy is considered to be a defining property of entanglement. In this context, monogamy means that, for example, if two quantum systems – say, two particles like photons – are maximally entangled, then they are in a “pure” joint state, and neither system can be correlated with a third system. Although the monogamy property of entanglement is well-known, and always valid in some precise qualitative sense, it has been challenging to quantitatively formalize the concept.

Now for the first time in the new study, the theoreticians have quantitatively formalized the monogamy property of entanglement in the most general terms. This has led them to the somewhat surprising discovery that, when it comes to the quantification of entanglement through widely used “entanglement measures”, entanglement does not appear to be monogamous.

Overall, the results help to advance the understanding of how entanglement can be distributed among multiple quantum systems. “Entanglement is at the core of quantum theory, and limitations in how it can be shared have both foundational consequences and applications in quantum technologies”, says co-author Marco Piani at the University of Strathclyde.