Mesolens is one of Physics World's Top Ten Breakthroughs of 2016

Gail McConnell and her colleagues in SIPBS have been recognised by Physics World as one of the Top Ten Breakthroughs of 2016 for the Mesolens, a new microscope lens that offers the unique combination of a large field of view with high resolution.

Optical lenses reached the limit of resolution set by the wavelength of light more than a century ago. However, no attempt was made to achieve the maximum resolution in the case of low-magnification lenses, probably because the visual image would then have contained detail too fine to be perceived by the human eye. Currently available lenses of less than 10x magnification are of simple construction and their numerical apertures (which determine their resolving power) are 0.2 or less, as compared with 1.3 or more in high-power lenses. They are perfectly adequate for the eye or a standard camera, but in the 1980s, confocal microscopy and improvements in camera resolution revealed a need for better low-power lenses: many researchers found that thin confocal optical sections could not be obtained at 4x magnification.

The Mesolens has the unusual mix of low magnification and high numerical aperture, at 4x & 0.47 respectively. When compared with a standard 4x objective, its lateral resolution is 5 times better and its depth resolution (which is vital for confocal or multi-photon microscopy) is improved by an order of magnitude. The lens is difficult to make because of the need for a higher degree of aberration control than in any standard camera lens and it is too large (optical train 50 cm x 7 cm) to fit on any standard microscope as well as having too great an aperture size for standard confocal apparatus, so Gail and her colleagues built the microscope around the lens. By using the full working distance of any objective lens and taking optical sections of the full circular field of view, a cylindrical volume can be sampled optically. If this is divided by the 1/e squared limit of the point spread function of the lens the number of resolved volumes that can be captured by the lens can be calculated. In this sense, the Mesolens, which can sample 108 cubic millimeters of tissue, has a hundred-fold advantage over existing technology and generates proportionally large datasets, with >50 GB common.

The Mesolens was originally designed to facilitate the recognition of developmental abnormalities in mouse embryos of up to stage e12.5. Such embryos are routinely used to screen human genes that are suspected of involvement in disease (e.g. congenital heart and vascular disease) and, as published recently in eLife, the Mesolens can reveal sub-cellular detail from every cell in a whole mouse embryo (http://dx.doi.org/10.7554/eLife.18659). However, the optical microscope is a primary tool of science, and the Mesolens is already being tested in brain research, in the study of infectious diseases and in cancer biology. For example, a small tumour can be examined in its entirety but the images are sharp enough to see the internal structure of individual cells migrating out of the mass. Previously, this could only be seen in a tiny sub-region, so important details could be missed. 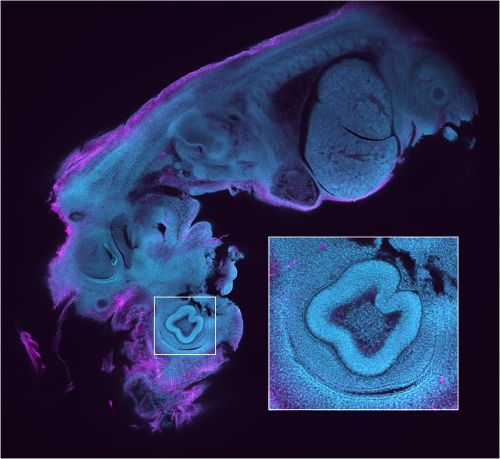 The image shows a dual-colour optical section of a 6 mm long, 12.5 day old mouse embryo obtained with the Mesolens in laser scanning confocal mode. The neuronal axons are stained with Alexa 594 (magenta) and nuclei with Acridine Orange (cyan). The inset shows a blow-up of the eye region revealing the individual cell nuclei. We can clearly identify fine structures throughout the embryo such as the developing heart muscle fibers and fine details in the eye such as the corneal endothelium.