In laser beams, electrical fields usually oscillate everywhere along the same direction representing a spatially uniform state of linear polarization. This represents a rather “dull” state. Researchers at the Dept. of Physics under the lead of Thorsten Ackemann with visiting researchers from the University of Montpellier and the University of Cordoba demonstrated the spontaneous emergence of laser beams with spatially non-uniform polarization. The research is published in Physical Review Letters and covered in Physics Focus.

Usually, huge efforts are made to engineer these beams using specialized optical arrangements for phase and polarization shaping of Gaussian laser beams. In contrast, the Strathclyde group operates a conceptually simple system based on a so-called vertical-cavity surface-emitting laser. Due to this simplicity, it was coined “Vortices of Light on the Cheap” in Physics Focus.

In presence of frequency-selective feedback, laser nonlinearities and small anisotropies are driving the formation of many complex vortex modes that break the laser symmetries spontaneously. In a loose sense, this is similar to throwing a dice to select a specific realization out of all possible polarization patterns. The dice in the figure illustrates three particularly interesting states: the white streamlines representing the polarization pattern can be oriented radially, or form spirals and even acquire a hyperbolic shape, the anti-vortex.

The observation are at the interface of singular optics, nonlinear science, and semiconductor laser technology and show analogies to spinor condensate dynamics. They open up new aspects of vectorial fluids of light on the fundamental side and might provide prospects for a versatile, simple vector vortex beam source for applications. 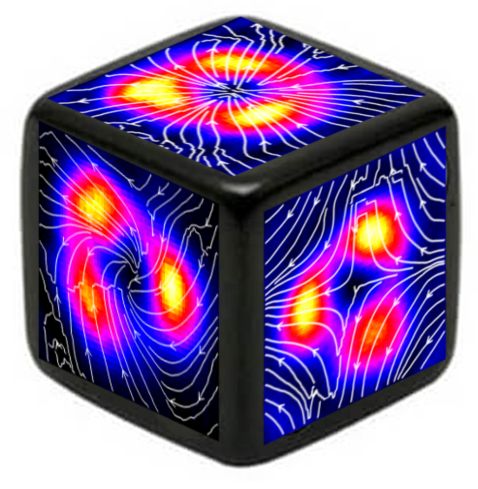