The fact that an accelerating electron emits electromagnetic radiation is well known. Perhaps less established is the concept that the emitted radiation acts on the electron itself to slow it down via a damping or friction-like force – a process known as 'radiation reaction'. This effect has been explored theoretically for decades and is postulated to occur in remote astrophysical environments (such as pulsars). Now, an international team of researchers, including Physics PhD student Matthew Duff and supervisor Paul McKenna, have for the first time experimentally demonstrated energy loss of electrons from radiation reaction arising from their interaction with extremely intense laser light. The experiment, which was led by researchers from Imperial College London, was performed using the Gemini laser at the Central Laser Facility, Rutherford Appleton Laboratory. The results were published on 7 February in the journal Physical Review X [1] and highlighted in the American Physical Society’s Physics editorial.

Photons of light scattered from an object moving at close to the speed of light (in this case, ultra-relativistic electrons) have their energy increased. At the high laser intensities used in this experiment, this process shifts the laser light scattered off the electrons from the near-visible part of the spectrum up to high energy gamma rays. The detection of this effect, together with measurement of the correlated decrease in the electron energy, provides the evidence of radiation reaction.

The Strathclyde group, including theoreticians and Dr Martin King, are also theoretically and numerically investigating the effects of radiation reaction on electron dynamics in dense plasma at ultrahigh laser intensities [2]. Experimental investigation of those effects will require even more powerful lasers, such as the international Extreme Light Infrastructure facilities, set to become operational from 2020. The development of the experimental techniques and underpinning research will be performed using the new 350 TW laser at the Scottish Centre for the Applications of Plasma Accelerators (SCAPA), here at the University. 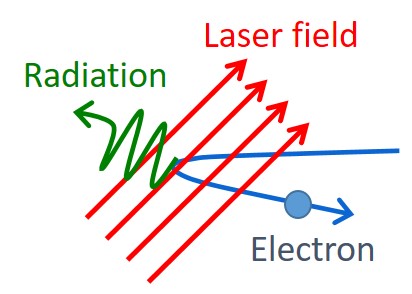