Increasing the maximum energy of ions accelerated via intense laser-plasma interactions has been a focus of significant international activity in recent years, due to the potential to develop compact high energy ion sources for established and innovative applications in science, medicine and industry.

In a recent experiment, a team of researchers led by Paul McKenna have made a significant advance in laser-driven ion acceleration. They have accelerated protons to energies close to 100 MeV – the maximum proton energy measured is in the range 94 to 101 MeV (as defined by the energy resolution of the detection technique). The results were published in Nature Communications on 20th February [1].

The experiment was performed using the Vulcan laser at the Rutherford Appleton Laboratory. The previous highest proton energy achieved using that laser was 55 MeV, in an experiment led by the same research group. Those results were obtained by using an intense laser pulse to drive electrostatic field formation on the surface of a micron-thick target foil. The higher energies achieved in the latest work were produced by exciting a hybrid ion acceleration scheme involving the radiation pressure of the intense laser light, interacting with an expanding ultrathin foil target.

One of the main challenges in accelerating ions using intense lasers is that the ultrafast processes occurring over the short duration of the laser pulse can make it difficult to optimise an individual acceleration mechanism. However, as shown in the latest work, this can also give way to the development of hybrid schemes involving two or more acceleration mechanisms, which can enable additional degrees of control on the final ion beam properties.

The study is part of an EPSRC-funded programme of research into the physics of plasmas that become relativistically transparent when irradiated by ultraintense laser light. This occurs due to the relativistic increase in the mass of the plasma electrons oscillating in response to the light. The group have previously shown that this approach opens up new degrees of freedom in controlling collective electron [2] and ion [3] dynamics in the plasma.

The latest results promotes further development of laser-driven ion sources and opens up a potential new route to actively controlling the spectral and spatial distributions of the resulting beams of high energy ions. The underpinning physics for the development of this new laser-driven ion acceleration scheme is being explored numerically using the ARCHIE-WeSt (Strathclyde) and ARCHER (Edinburgh) high performance computers and will be investigated experimentally using the 350 TW laser at the Scottish Centre for the Applications of Plasma Accelerators (SCAPA). 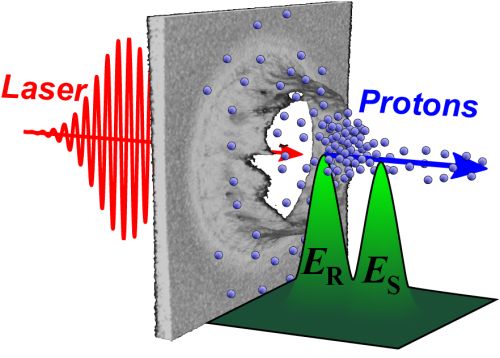