We are excited to welcome Dr Alessandro Rossi who has just joined the Department as a Chancellor’s Fellow. Alessandro has been appointed jointly with our strategic partners at the National Physical Laboratory (NPL), and he will help enhancing the ongoing collaborative research between Strathclyde and NPL.

Alessandro is an experimental physicist working in the area of semiconductor-based quantum electronics and his experience spans across academia and industry. In academia, he has previously held positions at the University of Cambridge where he was a Marie Curie Fellow, and at the University of New South Wales (Australia) where he was a Postdoctoral Fellow. In industry, he has previously worked for Hitachi Europe as a research scientist, and for Altran Ltd as a senior consultant.

At Strathclyde, Alessandro will develop novel nano-devices to tackle the challenge of building scalable and universal quantum computers using semiconductor materials, such as silicon and silicon carbide, which are inherently compatible with existing industrial manufacturing techniques.

Alessandro is based in JA707, do stop by and say hello! 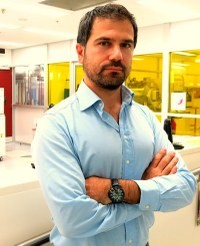