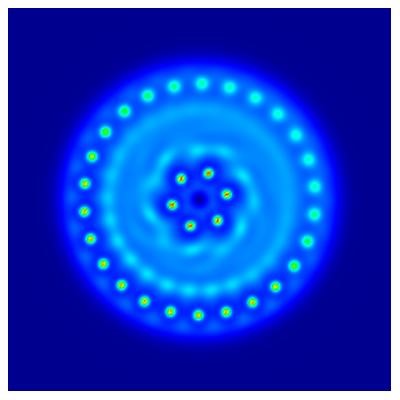 For Kerr media in optical cavities, spontaneous spatial pattern formation is due to the interplay of self-focussing nonlinearity, cavity detuning and a spatial coupling, such as diffraction or dispersion. Under the action of input beams carrying OAM, the output separates into concentric rings of patterned peaks that rotate with an angular velocity inversely proportional to the radius squared of the ring (see figure). We derive an exact expression for their angular velocity.

Using vector superpositions of orthogonally polarised Laguerre-Gaussian modes, we show that we can have full control over the angular velocity of the patterned rings and even produce concentric, counter-rotating patterns - an optical peppermill. Full control over the speeds of multiple rings has potential applications in particle manipulation and stretching, atom trapping, and circular transport of cold atoms and BEC wave-packets.