Work by a Strathclyde multidisciplinary team has been highlighted in recent publications. The Compact Multi-Spectral Imager for Nanosatellites (CMSIN) project is developing an innovative device that utilises a new kind of "single pixel" camera to detect and characterise objects with far fewer data than traditional devices, such as those used on Earth Observation (EO) satellites.

Single pixel cameras (SPCs) use mask patterns to modulate the light intensities of a scene before measuring the sum of the resultant light on a single pixel. By using a set of different masks, the resultant stream of single pixel intensities can be used to extract useful information about the scene using an algorithm called compressive sensing but using much less data than a normal photo of the scene would require. This is useful for small satellites that have limited computational and communication capacity. However, the need to use several masks in sequence means that this is difficult to deploy SPCs on a satellite orbiting at more than 8 km per second since the Earth passes too quickly before all the masks could be applied.

The Strathclyde team, made up of researchers in Physics, Electrical & Electronic Engineering, and Mechanical and Aerospace Engineering, have developed a new way of performing SPI that utilises the fast motion of the satellite to effectively apply the different masks over the scene yet retaining the advantages of SPCs together with new ones. This new method is called pushframe imaging, in reference to pushbroom imaging employed by conventional EO satellites.

The development of the concept has been supported by the UK Space Agency (NSTP3-PF-031) and the Centre for Earth Observation Instrumentation (CEOI 11th Call) with collaboration with local Glasgow engineering company Wideblue Ltd who has partnered to produce a prototype instrument for field tests (see picture). 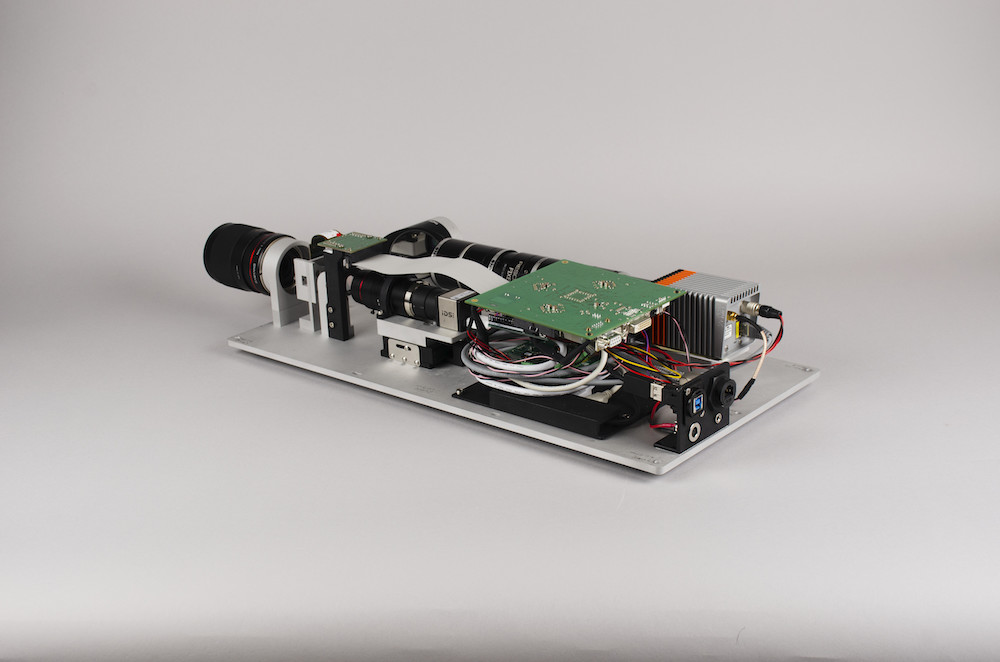 Prototype of the CMSIN Pushframe device. This engineering model is able to simultaneously image in the visible and near-infrared optical bands as it scans a scene. The image is compressively sampled, allowing rapid detection and characterisation of objects using a fraction of the captured data compared with a traditional camera. Experience gained from field trials of prototype will inform the further development of a space instrument that can be launched on a CubeSat (a type of nanosatellite) the size and mass of carry-on luggage. (Credit: Wideblue Ltd.)

The results of laboratory testing have recently been published in the journal Applied Optics and was selected as an Editor's Pick [1]. The work has also been highlighted in the industry journal IEEE Signal Processing in a Special Report, "Three New Imaging Technologies That Are Worth a Look" [2]. Field tests of the prototype are in the process of being conducted.