An international team of researchers from the Max Planck Institute for the Science of Light in Germany, the University of Strathclyde and Heriot-Watt University in Scotland, and the UK’s National Physical Laboratory in England have demonstrated a new type of interaction between counterpropagating light in tiny glass rings – “micro-resonators” – that can store light for millions of round-trips (see top of figure). Laser light starts to pulse by itself and to exchange the dominant direction of propagation.

Researchers and engineers are increasingly interested in the ‘cross-talk’ and symmetry breaking between two counter-propagating beams of light circulating into a micro-resonator, despite sending the same laser power in each input. The team discovered new mechanisms of optical pulses where the two beams take it in turns to be the brightest: they regularly or chaotically switch dominance hundreds of thousands of times in a single second (see lower part of the figure). Strathclyde researchers Lewis Hill and Gian-Luca Oppo explained that the complex system attempts to recover the lost symmetry where one beam has more power than the other, by switching in turn and in equal manners the dominant and suppressed modes.

These findings are exciting, not only for learning about the exotic ways in which light can behave in photonics, but also for realising a range of tiny all-optical, micro-resonator-based devices for switching and routing light in encoding signals and in generating cryptographic algorithms using chaotic pulses. 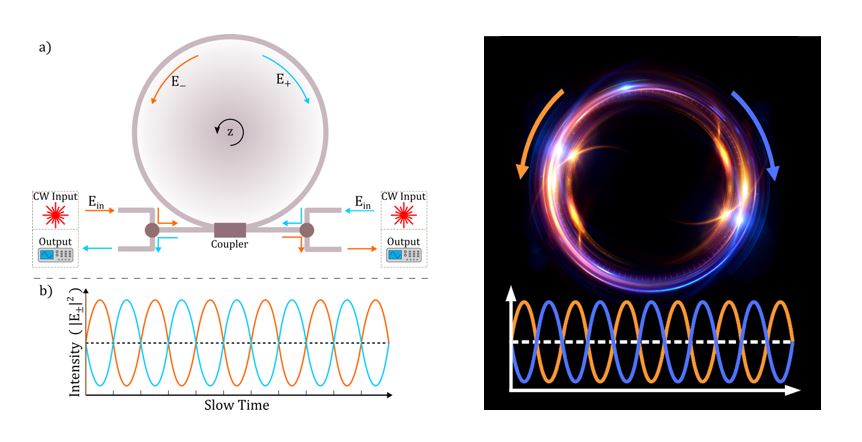