In the Gravity Group we focus on three strands of Gravity-related research:

Here, in collaboration with the Institute for Gravitational Research at the University of Glasgow, we are developing sensing technologies for the measurement and control of very small displacements, in order to mitigate seismic and other types of vibrational noise in GW detectors’ test-mass suspension fibres. Unchecked, this noise would otherwise impact adversely on the performance of such detectors. Specifically, we are working on displacement sensors which function at room temperature; but we aim to extend this work to displacement sensors which operate at cryogenic temperatures, since future GW detectors are certainly going to employ cooled test-masses.

Here’s an example of one of our ideas. It shows a ‘displacement-doubling prism,’ whose function is to double the apparent relative displacement of an optical-beam-interrupting mechanical ‘flag.’ The prism and its holder are seen cycling back-and-forth over a test-pattern, whose parallel lines are on a 1 mm pitch — every 5th line being bolder. One of the pattern’s bold lines is imaged in the window of the prism, and as the prism moves over a distance of 1 mm, the imaged line is seen moving — relative to a fixed line in the pattern — by 2 mm.

In the Figure below is seen an example of the detection of ‘Violin-Mode’ resonances in the silica suspension fibre of a test-mass suspension at the LIGO Lab, MIT, using one of our shadow-sensors. The displacement sensitivities of a set of four shadow sensors (one per suspension fibre of each 40 kg suspended test-mass) were calibrated, and found to be approximately 70 pm/sqrt-Hz at the fundamental Violin-Mode resonance (500 Hz), when averaged across the four sensors. This is perhaps two orders of magnitude higher sensitivity than has been reported elsewhere for similar shadow sensors. 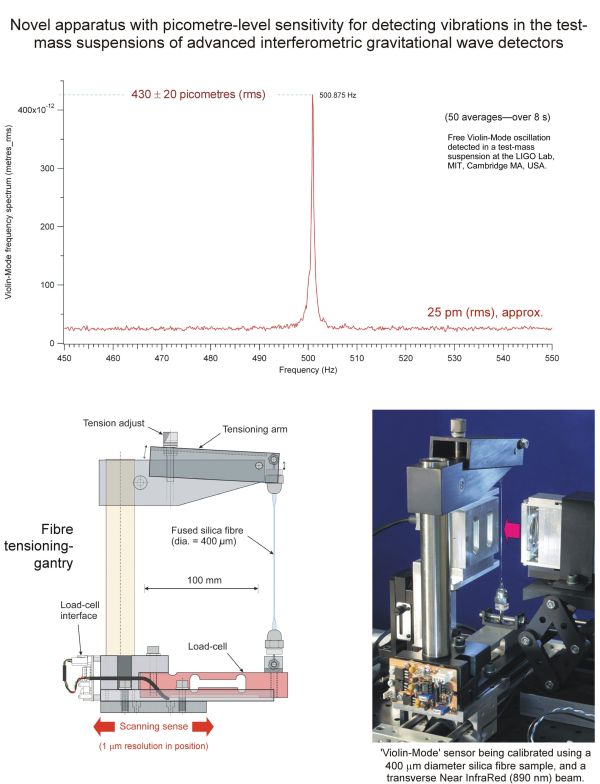 Globally, there is currently great interest in Carbon Capture and Storage, with a view to being able to sequester the carbon underground in the form of liquid ‘plumes’ of CO2 within depleted oil and gas wells. With financial support from the companies Shell, Gravitec, Guardian Global, and Fugro, together with a grant from the Technology Strategy Board, a Gravity Gradiometer is being developed at Strathclyde with the aim of being able to lower it down boreholes in order to monitor the continued presence of the liquid CO2 plumes.

In connection, once again, with GW detectors, it turns out to be important to be able to monitor the level and type of ‘instantaneous’ Newtonian gravitational coupling between moving local mass and GW test-masses. It is proposed to use the results from extensive work carried out by one of us (NAL), on the Satellite Test of the Equivalence Principle (STEP) experiment. For STEP, the interactions between local perturbing mass sources in an Earth-orbiting satellite and essentially cylindrical test-masses, were studied. It is proposed to adapt this work  to the very similar situation of the movement/vibration of mass, due to seismic and other sources local to each GW test-mass.