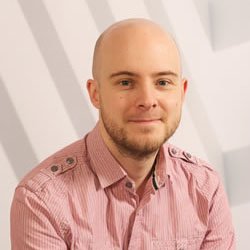 Jonathan J. D. McKendry received the M.S. degree in Electronics and Electrical engineering from the University of Glasgow, Glasgow, U.K., in 2006 and the Ph.D. degree in Physics from the University of Strathclyde, Glasgow, U.K., in 2011. In 2007 he joined the Institute of Photonics as a Ph.D. student where the focus of his Ph.D. was on the application of AlInGaN-based micro-LEDs for time-resolved fluorescence lifetimemeasurements and optical communications. He currently works as a Research Fellow in the Institute of Photonics, primarily on the subject of LED-based Visible Light Communications. To date, he has authored or co-authored in excess of 50 peer-reviewed journal articles and 30 conference submissions, as well as making contributions to book chapters and review articles on micro-LEDs and optical communications.

The research themes selected for the programme featured internationally leading groups at Strathclyde that are well supported by the EPSRC. Each theme is headed by a recognised pioneer in their field supported by a number of associated world class researchers. The five thematic areas were: Photonics, Power & Energy, Advanced Engineering; Advanced Manufacturing, and Bionanotechnology.

Strathclyde identified key international partners at various institutions in the USA and Asia with whom we wished to develop more strategic, mutually beneficial, relationships. We adopted a “best with best” approach, identifying internationally leading researchers who aligned well with several of our own EPSRC funded internationally leading experts. Existing interactions with the groups in the USA and Asia were at different stages of development so we aimed to escalate the relationship engagement levels from Tier 3 (Emergent), through Tier 2 (Developing) to Tier 1 (Strategic). The intention was to develop as many of the relationships as possible during the period of the award so that longer-term interactions could be established thereafter.
01-Jan-2012 - 31-Jan-2013