Strathclyde campus is supplied by low carbon energy, but how low can we go?

Decarbonising heat has been a tricky nut to crack. Currently, 37% of UK’s total carbon emissions come from how we heat our buildings, and a further 39% from how we power our buildings – whether that’s homes, businesses, or University campuses. We will see huge shifts in heating technology over the next decade.

The University of Strathclyde has already taken bold steps in decarbonising energy on campus, installing a District Energy Scheme in 2018. The Scheme provides energy to 75% of the Strathclyde’s John Anderson campus (18 Buildings), saving 25% compared to its previous heating system, a saving estimated to be 750 – 1,000 tCO2e per year. But, as part of his MSc studies, Alejandro Mar-Morales worked with Dr Jen Roberts and Sustainable Strathclyde to work out whether our lower carbon heat is low carbon enough to meet the University’s net zero carbon ambitions. 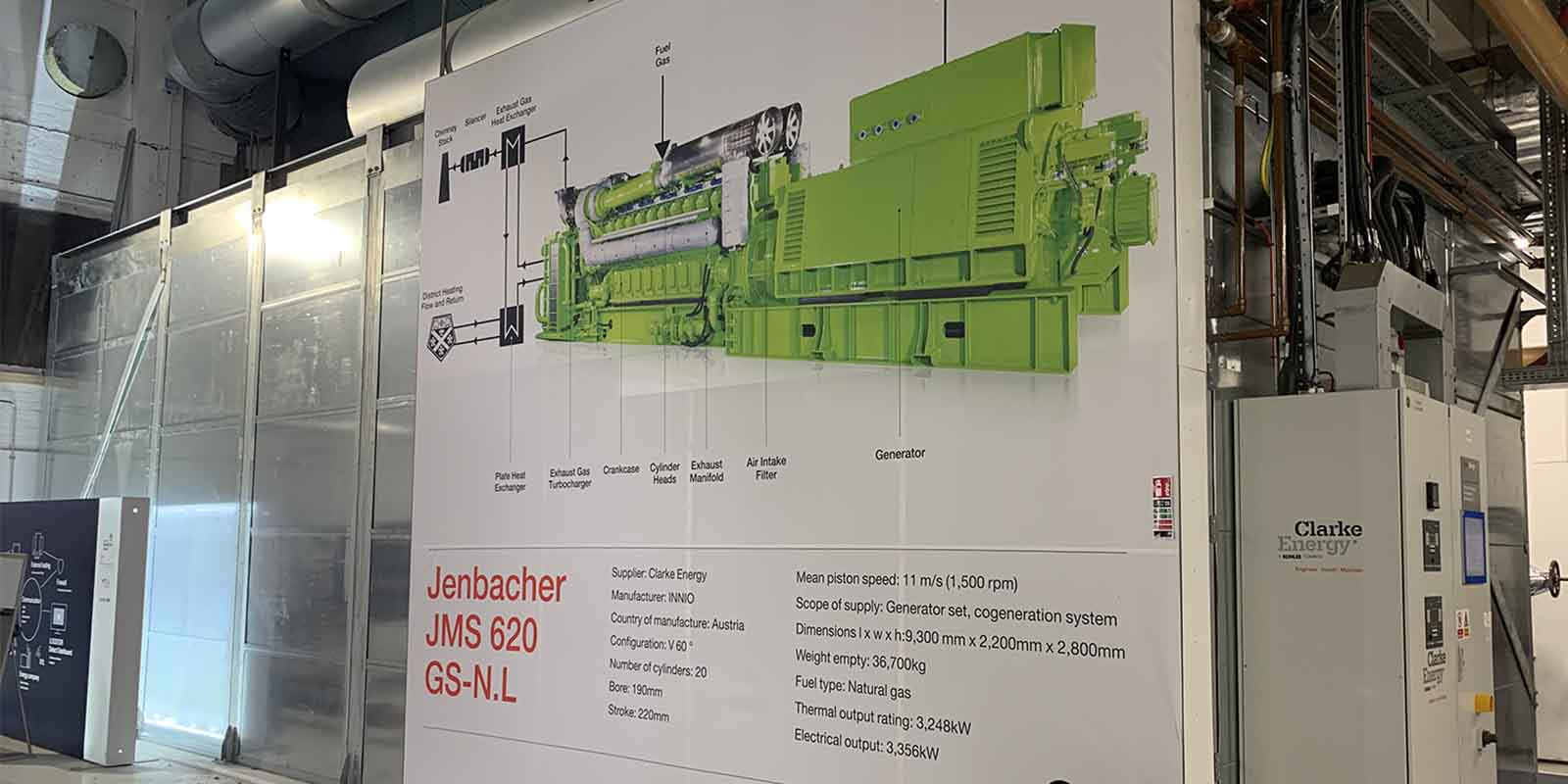 The University of Strathclyde, as part of it’s commitment to enhancing sustainability, installed a District Energy Scheme in 2018, with funding support from Scottish Government and Scottish Funding Council.

There are two key parts of the scheme: a Combined Heat and Power (CHP) system and the district heat network. Through several kilometres of pipework, the network distributes heat to buildings around the campus. Importantly also, the District Energy Scheme was designed to enable expansion of both heat and power to neighbouring buildings, helping to decarbonise Glasgow City Centre and its Innovation District, serving local communities and businesses in line with the university’s climate change and social responsibility commitments. The project also showed how complex infrastructure can be installed in a city centre location without significant operational disruption.

District heating networks such as Strathclyde’s are deemed critical to heat decarbonisation. Further, CHPs are lower carbon than distributed gas boilers and using electricity from the National Grid, owing to their greater efficiency (BEIS, 2020). However, the CHP is powered by natural gas and supplemented gas-fuelled boilers, and so it still emits CO2 from gas combustion.

The research team were interested to know how low carbon Strathclyde’s Energy Scheme really is, how it aligns with the University’s longer-term climate commitments, and how expansion of the scheme might influence its carbon footprint, and what next steps the University should take. They also wanted to look at how future schemes might reduce the footprint of the installation.

As part of his MSc. in Sustainability and Environmental Studies, Alejandro Mar-Morales assessed the upfront and operational carbon footprint of Strathclyde’s District Energy Scheme. This is part of the continuous study programme the university has for learning from the system for students, staff, visitors.

The research found that 62% of the carbon embedded in the infrastructure itself is attributed to the network of pipes used for transporting heat across campus. For future schemes to reduce their carbon footprint, they should consider using pipes constructed using recycled materials or low carbon steel.

As well as carbon embedded in the development, the operation of the energy centre racks up a hefty carbon tonnage: burning of natural gas to power the scheme totalled nearly 82 ktCO2e in 2019. However, the emissions saved by using a CHP instead of distributed gas boilers was calculated to be 1.5 ktCO2e in 2019. By these calculations, on heat alone, the carbon ‘payback period’ (the time needed to save the amount of carbon that is embedded in the infrastructure) is only 8 months.

In terms of power, compared to the national electricity grid, the CHP is ‘greener’, producing electricity that is 13% less emissions than electricity from the grid, using 2019 values. However, this won’t be the case for long: the electricity grid is continuously decarbonising as renewable energy sources provide more and more power. In fact, electricity from Strathclyde’s District Energy Scheme could be over double the footprint than the Grid by 2050, at the end of the Scheme's lifecycle.

Green (i.e. non-fossil fuel) sources of heat will need to be connected to the scheme by 2030 for it to continue to deliver ‘lower carbon’ energy to Strathclyde.

But if the network is expanded as was planned, then implementing a second CHP engine would keep the carbon intensity of the CHP at a reduced level, as emissions would be saved by not operating the gas boilers, helping Strathclyde stay on top of its commitments to Net-Zero.

So what’s next for Strathclyde’s energy system?

Strathclyde’s Energy Scheme is low carbon for now, but in order to meet climate goals, a new source of fuel will be considered. Burning natural gas, a fossil fuel, for energy is not compatible with ‘net zero’ carbon emissions. Green (i.e. non-fossil fuel) sources of heat will need to be connected to the scheme by 2030 for it to continue to deliver ‘lower carbon’ energy to Strathclyde. Different low carbon heat sources will be appraised. Strathclyde are already well into the planning phase for developing a pathway to a net-zero 2030. We are preparing to get our buildings net-zero-ready through activities such as improved building fabric and optimised heating systems. This will improve energy efficiency and enable integration of heat pumps as a very low carbon heat source. And we are looking beyond the campus, too. Last year’s Climate Neutral Districts Vision Paper (2020) considered the feasibility of integrating heat, power, transport, adaptation and wellbeing for the delivery of “whole systems”, climate resilient districts – one of which being the University of Strathclyde’s Innovation District.

We are not alone in this challenge: of all the district heating networks installed in the UK, over 90% use a fossil fuel source. Strathclyde’s gas boilers have a life expectancy of 30 years, taking us to 2050.

The UK’s Climate Change Committee expect that all new schemes from 2025 won’t use gas, and those that currently do, like Strathclyde’s, will convert to low-carbon heat sources by 2040.

As with most things, Strathclyde will aim to be ahead of this curve.

You can take a virtual tour of the Energy Centre! Follow the link to the video from the CHP pages.

Department for Business, Energy and Industrial strategy (BEIS) (2020). Combined Heat and Power: the route to 2050 - call for evidence [Online]