The image shows the Solar-Hydrogen Hybrid System proposed to feed the energy demands of a grid-connected building/campus to eliminate/reduce the carbon footprint associated with its energy consumption. This innovative system will accordingly contribute to reducing the building sector energy consumption carbon footprint. The implementation of this system would provide crucial contribution to achieving the 2050 net-zero carbon target. 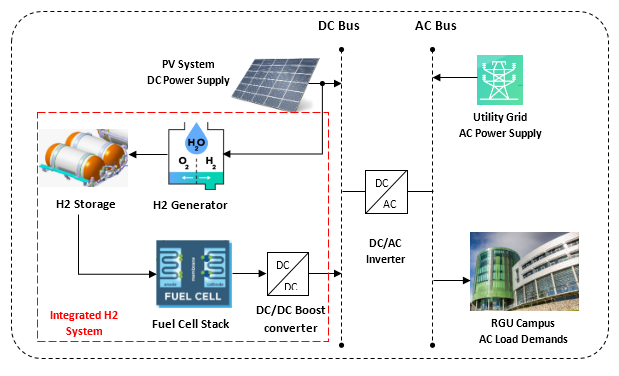 The ongoing growth in global energy demands and the associated catastrophic climate change has accelerated the need for setting net-zero carbon pathways. This project aims to employ green hydrogen as a pathway for empowering the low-carbon economy.

The project work involves developing an optimization model for achieving the optimal sizing, cost, and energy management of the proposed Zero-Carbon Hydrogen-Based Grid-Connected Building Scenario so it could be replicated throughout the UK to minimize the building sector carbon footprint, thus contributing to the UK 2050 net-zero carbon emissions target.

The implementation/validation of the proposed project will be carried out on the RGU campus to support the University's ongoing campaign towards achieving the 2050 net-zero target.