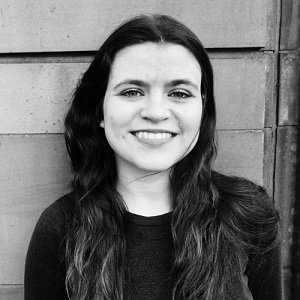 Tell us a bit about your background…
I come from a small village in the very north west of Scotland. When the time came to choose a course at university, I found myself weighing up pharmacy and languages… in the end, I opted for languages because I really wanted to have the chance to spend an extended period of time abroad, and a languages degree was the ideal route for that.

Why did you decide to study at the University of Strathclyde?
Choosing Strathclyde was linked to my desire to experience different ways of life and develop my language skills as much as possible, since it was the only university to offer a full year abroad for each language – other universities offered only one year, to be split between two or more languages. I also liked Strathclyde’s focus on modern history, literature and culture.

What has been the highlight of your time at Strathclyde?
I really enjoyed my years abroad, but technically I wasn’t at Strathclyde during them so I guess they don’t count! So, I would say that my final year has been the best part of my course. It sounds crazy, but all my hard work from previous years paid off and I really enjoyed the final year coursework… it was amazing to really feel fluent in my languages.

What would you say is one of the key takeaways from your programme?
Believe in yourself. Moving abroad alone three times (I also worked in Colombia over the summer before my final year) isn’t easy, and I was really scared every single time I did it! But you learn so much about yourself, about others and I think my experiences learning languages has shaped me as a person in very positive ways.

What would be your advice for people considering studying at Strathclyde?
Consider your course carefully, and be clear on what you want to get out of it. Then, remember that a degree/a university experience is what you get out of it. Don’t be afraid to knock on doors, push for access to opportunities, and make the most of all the support available to you.

What has been the main challenge while studying at University?
Probably adjusting to life in Glasgow, first coming from a very rural part of Scotland and then re-adjusting after my time abroad. However, Glaswegians are so friendly and there are a lot of different things to do in the city, if you know where to look and don’t mind travelling a wee bit. I didn’t find it difficult to make friends, not even coming back and not knowing anyone, after having taken a year out.

If you could travel back in time to give advice to yourself on your first day at Strathclyde, what would you say?
Don’t be shy! You’ll surprise yourself.

What do you hope to do when you complete your course?
I have joined the Teach First programme to train as a secondary MFL teacher, which I am really excited about. I’ll be working for the next two years in a secondary school in the north east of England. To be honest, previously I was determined I wouldn’t become a teacher, because I felt it was THE most unoriginal career choice after a languages degree. However, after sincerely enjoying almost every day of teaching English as a foreign language in Switzerland – and staying on to do it for another year, just to be sure I liked it – I decided to swallow my pride and go down the teaching route. I really have surprised myself.