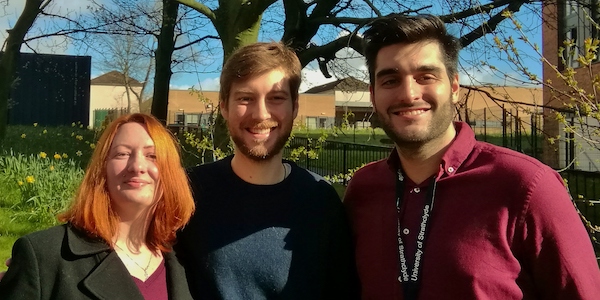 Mariana has a masters degree in Law and International Relations from the Federal University of Santa Catarina/Brazil. As part of the Group of Advanced Studies of Economics and Environment in International Law (EMAE) she has been involved in international and national university projects on research with focus on environmental and international law. Mariana is currently working on her thesis on “Biodiversity, intensive agriculture and the implementation of the Paris Agreement on Climate Change”, the general aim of this study is to investigate the policies and international commitments under the Paris Agreement to conserve biodiversity. During her time at Strathclyde Centre for Environmental Law & Governance is aimed investigate more deeply the field of law for conservation and sustainable use of biodiversity, considering intensive agriculture and the Paris Agreement.

Lennart is visiting from Georg-August-University of Göttingen, Germany, where he has been working as research fellow at the Institute of International and European Law since October 2016. During this time, he has, inter alia, been in charge of an investigation concerning the legal aspects of a reform of the European emissions trading system. After concluding his general studies in law in July 2016 with the German state exam and a complementary magister legum europae (MLE.) in 2014, he is currently pursuing his PhD research on aspects of the rule of law in the area of climate change law and governance. The research is in particular focused on the prospective role of domestic courts under the Paris Agreement. During his stay he will also collaborate in the Climate Change Litigation Initiative (C2LI) at SCELG.

Gastón holds an LLM in Environmental Law from the Rovira i Virgili University (Spain, 2016) and has a strong interest in human rights, environmental democracy and climate change law. Gastón is currently a predoctoral researcher at the Tarragona Center for Environmental Law Studies (CEDAT- Rovira i Virgili University) while working on his PhD thesis on “Climate change litigation in the Latin American scope”. His research is part of a CEDAT project called “Global Climate Constitution: Governance and law in a complex context”. The general aim of his work is studying the possible perspectives and limits of litigation as a tool to improve climate justice in Latin America. During his time at SCELG, he is aimed to work in different research papers related to his topic and collaborate with SCELG projects such as the Climate Change Litigation Initiative (C2LI).