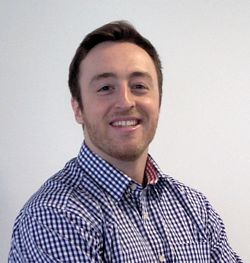 Dr David MacLellan has been awarded the Institute of Physics’ Culham Thesis Prize for 2015. The prize is awarded annually to "the candidate who has displayed excellence in the execution of the scientific method as witnessed by the award of Doctor of Philosophy in Plasma science from a UK or Irish university".

David MacLellan’s research, under the supervision of Paul McKenna, has resulted in new understanding of fast electron energy transport in dense plasma. The work shows the importance of new electrical resistivity descriptions in the ‘warm dense matter’ regime, where neither condensed matter nor plasma models are adequate to describe self-generated resistive magnetic fields in solid-density plasma. David conducted his experimental work using the Vulcan laser system at the Central Laser Facility and his modelling using several computer clusters, including ARCHIE-WeST.

David received his award at the 2015 Institute of Physics Plasma Physics Conference.