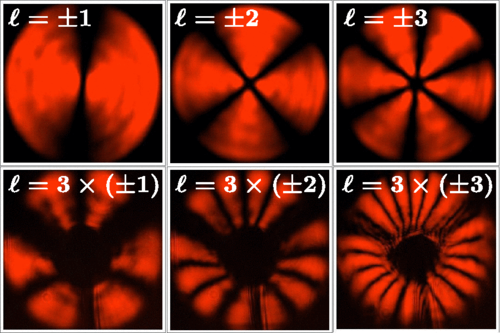 Daniel Oi and John Jeffers together with former CNQO members Vašek Potocek and Filippo Miatto in a collaboration including the Czech Technical University in Prague, Glasgow University, the University of Ottawa in Canada, the University of Rochester in New York State and the Institute for Quantum Computing in Waterloo, Canada have described the theory and performed a confirming experiment that mimics this famous paradox.

The research shows how to create gaps in a basis of quantum states by moving the state numbered by n to 3n. The extension to Hilbert’s Hotel that quantum physics allows is that not only is the occupied basis state (or room) changed, but the full complex quantum amplitude is moved to the new basis state in a coherent fashion. This means that superpositions of states with different n are maintained. The basis that is used in the experiment is the orbital angular momentum basis of light. The results reported would allow for interleaving of separate quantum states (new quantum guests). The research is reported in Physical Review Letters, PRL 115, 160505 (2015) and was highlighted by the American Physical Society http://physics.aps.org/synopsis-for/10.1103/PhysRevLett.115.160505.﻿