Horiba Jobin Yvon IBH, Physics Department spin-out and subsidiary of the Horiba Group, has entered into a research partnership as part of the imaging-focused QuantIC programme, one of the four Quantum Technology Hubs in which the Department collaborates. Under the leadership of Professor David Birch, they are set to work on multiplexed time-correlated single-photon counting (MUX-TCSPC) fluorescence systems with the University of Edinburgh.

David leads the Photophysics group, which has particular expertise in fluorescence lifetime techniques used in biomedical applications. David is one of the co-founders of IBH before it was acquired by the Horiba group in 2003. Incorporated in 1977, it was one of the first modern-day spin-outs from a Scottish university. The Photophysics Group were the first to demonstrate the principle of MUX-TCSPC in the 1980s and recent developments in detector arrays promise new levels of performance.

In the four decades since the spin-out was founded, the company has pioneered advances in TCSPC technology, for example developing picosecond-scale diode light sources suitable for the ultrafast timescale on which fluorescence takes place and UV LEDs for protein analysis. While these have expanded the application range of TCSPC well beyond the specialist laboratory, the aim of the new research project will be to develop a multiplexed version of the technology capable of capturing the full "signature" of a molecule's fluorescence. That signature includes such as excitation and emission wavelengths, fluorescence intensity, decay time, polarization, position etc. At present, even the most advanced commercially available fluorescence instrumentation can access only a small fraction of this information at a time. As a result, many sequential measurements over a long period are needed to build up a complete molecular fluorescence signature. The new development is expected to open-up new applications, for example in the study of transient species. 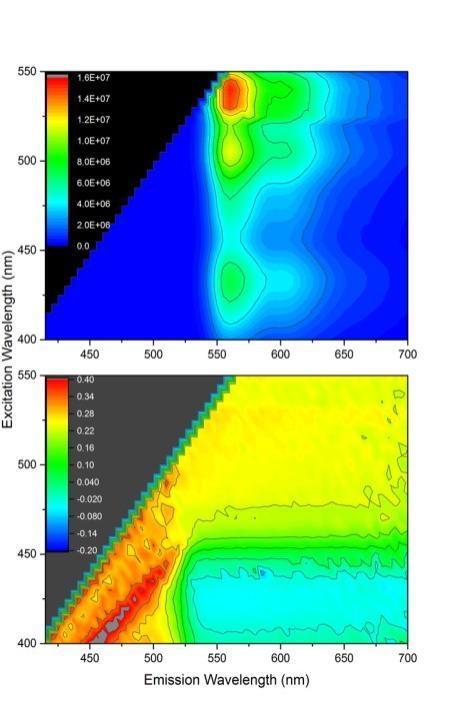 The excitation-emission-intensity signature (upper) and polarized excitation-emission-intensity signature (lower) of a fluorescent dye (ADOTA) recorded using sequential measurements.* The matrices are rich in information, but array technology will bring time and other parameters into this signature to give an even higher level of specificity and quicker measurements.