For the past three decades mystery and debate have surrounded the existence of a threshold (the point at which a light emitting device becomes a laser) in nano-lasers, even leading many to think that there are “thresholdless” laser devices. However, thanks to the development of a new quantum laser theory we now have the answer: thresholds do exist for nano-lasers! Up until now physicists have used theories either for macroscopic devices, lasers that can sit on your table, or nano devices, lasers many orders of magnitude smaller than the thickness of a human hair, but a new theory developed by Mark Carroll, Giampaolo D’Alessandro, Gian Luca Lippi, Gian-Luca Oppo and Francesco Papoff bridges the gap by combining different aspects unique to them both. This means that it can be used to study nano-lasers with just a small amount of gain (material used to create the laser light) as well as macroscopic devices with huge gain.

The red star on the green curve in the figure corresponds to the laser threshold for the so-called “thresholdless” laser. The new theory also predicts, irrespective of the mode volume or density of the gain used, the existence of a purely quantum feature, the antibunching region, that always precedes lasing - the threshold for the antibunching regime is marked by the red crosses in the figure. 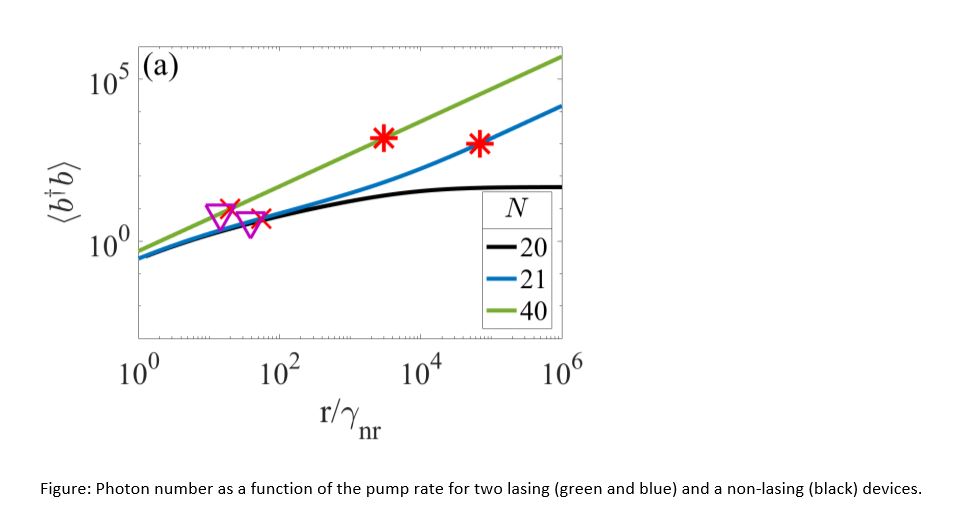