Understanding transport phenomena in lattice potentials is a key prerequisite for the creation of high-temperature superconductors and novel electronic devices. The behaviour of single particles is often well-known, but it is difficult to predict the response of many interacting particles to a driving field. This problem is even harder if the system requires a quantum description and the particles form many-body states.

Active research is currently ongoing in quantum physics, optics, and condensed-matter physics to understand the response of many-body systems to the case of driving forces that are periodically modulated. Those “Floquet driven” systems show many surprising effects, such as phase transitions, localization and giant large-scales oscillations.

A collaboration of researchers at the University of Strathclyde and Durham University, led by Dr Elmar Haller, recently demonstrated a new quantum state of matter waves in such a Floquet driven system, called a “Floquet soliton”. Surprisingly, strong periodic forces can provide stability and generate stable matter-wave packets instead of creating dispersion and spreading. In optics, Floquet solitons of light have recently been demonstrated for waveguide arrays. The researchers of the collaboration demonstrated that the concept can be extended to matter waves. For their studies, they used Bose-Einstein condensates of ultracold atoms close the zero temperature and optical lattices which are formed by interfering laser light.

“We were particularly surprised by the long lifetime of the solitons, which survived for more than 1 second,” says Matt Michell the lead author of the study. “The Floquet solitons even formed themselves by ejecting excessive atoms when we tried to create them in an unstable parameter regime.” 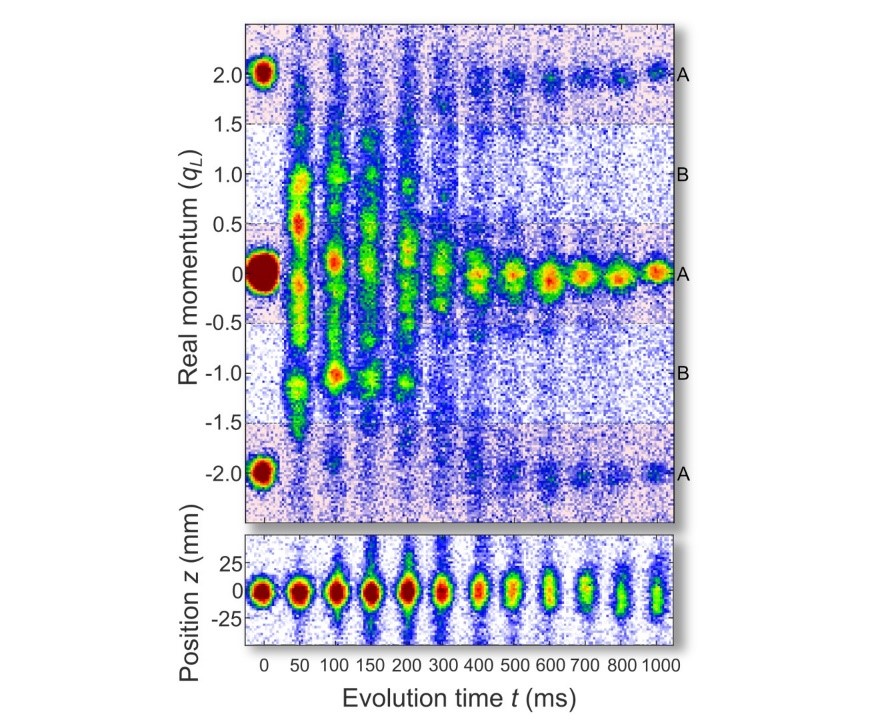 Figure: Formation of a Floquet soliton in momentum space (top) and position space (bottom). The initial density and shape of the wave packet exceeds the stability criteria resulting in a shedding of atoms along the vertical direction until a stable soliton is formed.