A Physics researcher at the University of Strathclyde has received a Research Fellowship from the Royal Academy of Engineering (RAEng) to develop technology for quantum navigation.

Dr James McGilligan is one of 16 recipients of Research Fellowships, announced by RAEng to mark the programme’s 20th anniversary.

His project will investigate microfabricating chip-scale atomic platforms for quantum navigators. These have potential applications in areas such as navigations, land surveyance and critical life systems.

It will also explore the development of highly accurate atomic clocks. There is an urgent need for a UK source of chip-scale clocks to protect core infrastructure, as well as the development of such quantum navigators with pioneer new technologies, including faster telecoms, mobile aerial platforms, and ever more secure communication protocols.

Dr McGilligan’s fellowship is worth £500,000 over five years. It will initially enable him to recruit two PhD students to work on the project. 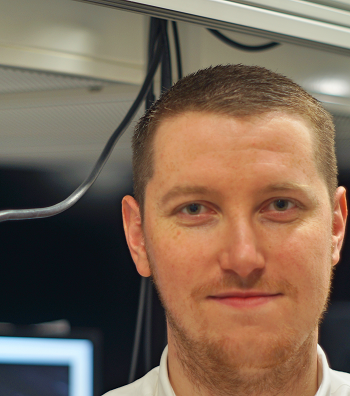 Dr McGilligan said: “The research environment we have at Strathclyde, and the Glasgow City Innovation District, will enable our work to have an industrial and social impact.

“Our industrial partners will want technology that is innovative, simple, small and robust; this is where microfabrication comes in. Developing optical platforms on the scale of microns can open up a plethora of applications, finally bringing the technological benefits of quantum technologies out of research labs and into the real world.

“They can be put on satellites, in computers or in cars; the positions they identify you as being in can be the difference between being on the right side of the road and the wrong side.

“Accurate timing is also important in the financial sector, as well as in land surveying and civil engineering. If, for example, a bridge is sagging, an accurate device at small scale can be placed on a bridge and pick up how much sagging is taking place before it’s too late.

“A device that’s sensitive to gravity could also monitor volcanoes and be able to make early detection of the flow of lava underground.”

Research Fellowships are the Academy’s flagship scheme, supporting outstanding early-career researchers to become future research leaders in engineering. The fellowships are designed to advance excellence in engineering by providing funding for five years to allow awardees the freedom to concentrate on basic research in any field of engineering.

Professor Philip Nelson CBE FREng, Chair of the Royal Academy of Engineering Research Fellowships Steering Group, said: “The Academy owes a huge debt of gratitude to the many Fellows who provide a considerable amount of time and in-kind help with the selection, mentoring and networking of awardees.

“By providing long-term support in this way, they are helping the next generation of leaders establish their independence and global reputation and contribute towards building a sustainable society and inclusive economy that works for everyone.”

A Quantum Technology Cluster is embedded in the Glasgow City Innovation District, an initiative driven by Strathclyde along with Glasgow City Council, Scottish Enterprise, Entrepreneurial Scotland and Glasgow Chamber of Commerce. It is envisaged as a global place for quantum industrialisation, attracting companies to co-locate, accelerate growth, improve productivity and access world-class research technology and talent at Strathclyde.