As Scots Paralympic swimmer Toni Shaw took to the podium in Tokyo, along with her family and friends, one woman in particular was watching with pride.

Toni has been able to fulfil her long held dream of competing for ParalympicsGB thanks in part to the ingenuity of Sarah Day, who created a state-of-the art prosthetic arm to assist the 18-year-olds strict training regime.

On day one of the swimming at the Tokyo Aquatics Centre, the swimmer took Bronze in the 4000m Freestyle event, becoming the first Scot to win a medal at this year's Paralympics.The dedicated teenager set a new personal best, and a new Scottish record on what was her Paralympic debut,with a time of 4:39.32. Days later Toni only narrowly missed out on a second Paralympic medal in the 100m freestyle final.

After her medal victory, Toni told Channel 4: “It’s been a different journey over the past year but without my coach, my team and my family I wouldn’t be here.”

Certified prosthetist and orthotist Sarah from the University of Strathclyde came to Toni’s aid when she was contacted by one of her coaches in 2018. Born without her right hand, Toni, who was just 14 when she represented Scotland at the Gold Coast Commonwealth Games and reached four finals, had long dreamt of being selected for Tokyo. But because her right hand never fully formed, her training was hampered by the fact she wasn’t able to carry out much of the upper body strength conditioning work vital for a swimmer.

Toni didn’t use a prosthetic arm in everyday life but her Physical Preparation coach, David Boyd from sportscotland, researched available prosthetics. Realising there was nothing suitable for Toni’s specific training needs, he contacted Sarah at the National Centre for Prosthetics and Orthotics at Strathclyde.

Sarah created a one-off state-of-the-art prosthetic arm for Toni made of carbon fibre, which can be changed with several different attachments, allowing the Paralympian to complete exercises including pull ups, bench press, handstands, and other exercises involving barbells and dumbbells. 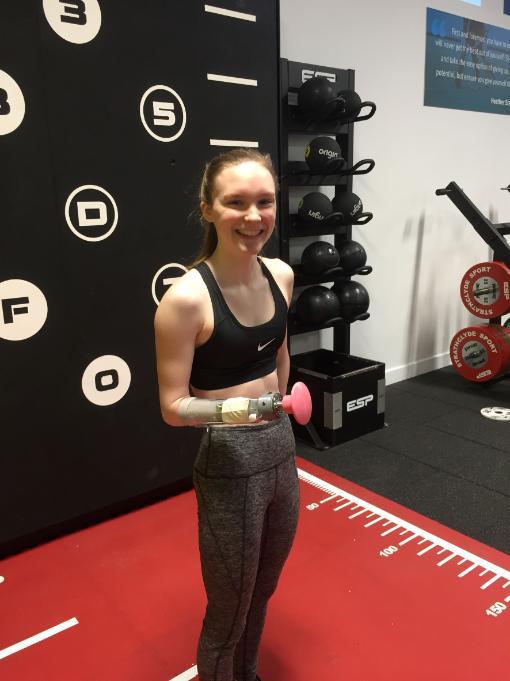 The Teaching Fellow in Prosthetics and Orthotics said: “David explained he was trying to build up Toni’s upper limb strength but because of the imbalance, it was hard to exercise the side without the hand and her muscle bulk was becoming uneven in the training.

“We got Toni down to the University and worked out what she needed and what the options were. The aim was to make a custom device which would give even limb length and enable Toni to safely hold bars and lift weights.

“For me the challenge was also making an arm that was strong enough to allow Toni to hang off a bar in the gym.”

After taking measurements and a plaster cast of Toni’s arm, a trial prosthesis was made, with components sourced from the USA and Sarah added: “We fitted the prosthesis and tested it out in the university gym before I made a final prosthesis which Toni has been using since. She’s now able to bear weight through her shorter limb and lift weights more effectively. “

The prosthetic proved even more important during lockdown when Toni, who set new Scottish records in the 100m freestyle S9 and 50m freestyle S9 and a new British record for the 100m butterfly S9 at the Scottish National Open Championships in 2019, wasn’t able to access a pool for periods of time and focused on land-based training.

David Boyd said: "The prosthesis has made a huge difference to what Toni can do in terms of her range of training. She’s made objective, measurable improvements in her upper body strength which can be connected to the use of the prosthesis and looks really strong in the pool. Without it, there would be a limit on what she could do on land, so it has enhanced her capacity for training. The application in the gym is great, but more important is the transfer to the performance in the water in the lead up to Tokyo."

Toni, who was also named Young Sportswoman of the Year for 2020 at the Scottish Women in Sport Awards, used the prosthesis right up to heading to Japan where she is taking part in a pre-Games training camp.

When I heard Toni had been selected for Tokyo I was just absolutely delighted for her as I knew this has always been what she’s been working towards. I’m so pleased this technology has been able to let her increase her strength and get her where she needs to be and for her dreams to come true.

“I think this is just the beginning for her and I know I felt incredibly proud when I watched her in action at the Paralympics. The medal is just the icing on the cake."