Category: Behind the science

Four possibilities for temperatures at the Earth's surface in 2100, as calculated by our climate model (UKESM1) using four scenarios for future greenhouse gas emissions. We use UKESM1 to explore possibilities for Earth's climate, including the way warming varies over the planet, and how it depends on emissions. The Arctic warms more than elsewhere; for the 'middle of the road' future, its temperature increases by as much as 20 degrees. 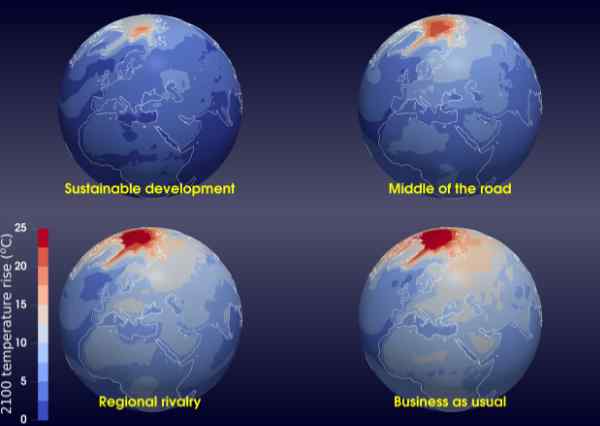 Earth's climate is governed by several complicated interacting processes. Levels of future warming depend on the amount of carbon dioxide (CO2) we emit and on how much of this emitted CO2 stays in the atmosphere.

This is determined by the Earth's carbon cycle, which involves atmospheric chemistry, the ingestion of carbon by plants (governed by rainfall and temperature), and carbon uptake by the ocean, which is a function of ocean temperature, chemistry, and biology. We have incorporated these processes, using knowledge from diverse science domains, into UKESM1, our state-of-the-art climate model. Given a scenario for how CO2 emissions could change in the coming years, UKESM1 calculates how the Earth's climate will respond.

Scenarios range from one where the world shifts to more sustainable development, through the 'middle of the road' in which technological trends are similar to historical patterns, a 'regional rivalry' characterized by countries focussing on regional issues ahead of global cooperation to a business as usual world that continues to rely on fossil fuels, resulting in rising emissions of CO2.

Our image shows surface temperature, as calculated by UKESM1, for each scenario in the year 2100. Temperature is measured as the difference from the mean historical temperature between 1850 and 1900, focussing attention on changes since that pre-industrial period. Warming increases as emission levels rise and is not distributed evenly around the world.

Thus, although the middle of the road scenario sees a global average temperature rise of 4 degrees by 2100, parts of the Arctic warm by as much as 20 degrees. The scale of the problem of climate change, coupled with the efforts required to mitigate its effects, can be daunting and requires a sustained level of engagement with the public and other non-specialist audiences. Images like ours play a valuable role in making this connection.