Newcastle University's Dr Nick Baker demonstrating electric power take off in a small scale wave energy converter. Wave energy is a huge source of renewable energy which is fraught with technical challenges. Waves cause the sea surface to move slowly up and down, but most electrical generators need high speed rotation to be effective. These tests proved our generators efficiently convert wave motion into electricity and by 2023 we will be installing a generator in the North Sea. 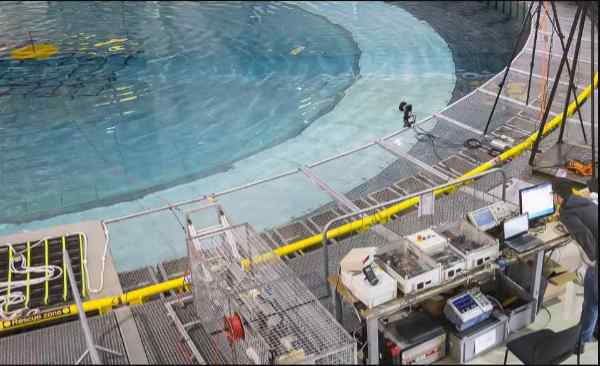 Wave energy has been largely unexploited, partially because the slow movement of water does not match well with conventional electrical generators that need high speed rotary motion to operate well. Gearboxes and other mechanical linkages to increase speed have proved troublesome in wave energy converters, for example by being unreliable or requiring regular maintenance.

In this research, Newcastle and Edinburgh Universities have developed electrical generators and power electronics that work well in slow-speed operation without gearboxes called an all-electric drive train. The technology, which has just one moving part, has been shown to operate efficiently and reliably at a laboratory scale within a wave tank. We have also proved that the generator can control the movement of the wave energy converter in different sea waves.

We are now developing the technology at a larger scale for deployment at sea, moving wave energy a step closer to reality. Corrosion, biofouling, and reliability must next be tackled to gain confidence in the technology. We plan to run the electrical generator flooded with seawater, so there will be no requirement for sealing and therefore a much-reduced requirement for device maintenance.

As a steppingstone towards large wave energy generators and mass zero-emission electricity generation, this concept is being applied to two offshore energy users