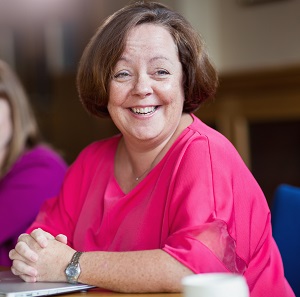 I started teaching in 1992, and have taught English all my teaching career. I became involved in pastoral care in 1993, and was appointed as a Principal Teacher of Guidance in 1996; the years spent in this role were amongst the happiest and most rewarding of my career. Having spent 19 years in Pastoral Care, I decided that I wanted to take the next step and I became Depute Rector in charge of Pastoral Care in a large, successful independent Glasgow school. I love my job and I’m very lucky to be able to see the pastoral care role from a different perspective.

I decided that I wanted to develop more as a leader, and I wanted to see if my experiences matched the theory! The University of Strathclyde course offered flexibility and convenience which was crucial in terms of fitting it into a very busy schedule. I had heard informally from networking that the student support on the course was excellent. My initial aim was to find space and time to step back from the hurly burly of the chalk face and examine the theory behind the decisions I was making at senior management level. I also wanted to develop my academic skills, having not been in an academic setting for some time.

The course itself was, in summary, the best CPD I’ve ever done. The variety of tutors for different elements of the course was interesting and stimulating, but what was incredibly useful was having the same tutor throughout the 3 years, as she was able to underpin the academic content with knowledge, empathy and practical experience. I really valued the academic stretch of the course – but the assignments were such that I was able to relate that to what I do on a day-to-day basis in school. I also found my peers on the course to be the most supportive people I’ve met on courses and it was so interesting to hear all the different perspectives. I learnt a lot from the other students. I had expected the course to be hard work, and it was, but what I had not expected was that the time spent in the classrooms on winter evenings and cold Saturday mornings would be quite such a stress-relief! It was such a luxury to be able to stop and think about theory and strategy. I am now much more aware of what decisions I am making in the workplace, and why I am making them. I also hadn’t expected to enjoy the course quite as much as I did, and once I’ve had a break of a year or so, my next step will definitely be the EdD course at Strathclyde.