Faults and fluid flow (FAFF) is a research collaboration led by Prof. Zoe Shipton and Prof. Becky Lunn in the Department of Civil Engineering at the University of Strathclyde. FAFF is a multidisciplinary group of researchers with expertise including:

Our aim is to use a range of tools to: 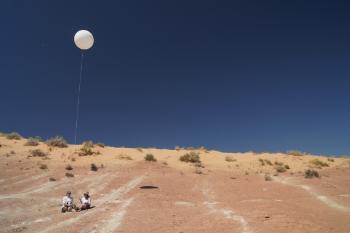 Members of FAFF at the Moab fault in Utah, piloting a novel means of mapping fault architecture using a helium balloon.

There's considerable industrial interest in assessing the permeability of faults for the purpose of oil and gas production, deep well injection of waste liquids, underground storage of natural gas and disposal of radioactive waste. Prior estimation of fault hydraulic properties is highly error prone.

Faults zones are formed through a complex interaction of mechanical, hydraulic and chemical processes and their permeability varies considerably over both space and time. Algorithms for predicting fault seal potential using throw and host rock property data exist for clay-rich fault seals but are contentious. In the case of crystalline rocks and sand-sand contacts, no such algorithms exist.

In this research, we explore the spatial and temporal evolution of fault zones through development and application of a 2D hydro-mechanical finite element model (MOPEDZ). The development of fault zone damage is simulated perpendicular to the main slip surface using a fully coupled solution of Navier's equation for mechanical deformation and Darcy's Law/conservation of fluid mass for subsurface fluid flow. MOPEDZ is applied to study development of fault zones in basement rocks, based on the conceptual model of Martel (1990). We simulate the evolution of fault zones from pre-existing joints and explore controls on the growth rate and locations of multiple splay fractures which link-up to form complex damage zones.

Results from these simulations have been validated using outcrop data and research is now in progress to up-scale our results for determination of statistical parameters describing larger scale spatial permeability structure in faults.

Characterising the permeability of faults is critical for effective underground disposal of radioactive waste, storage of natural gas, deep well injection of waste liquids (including CO2) and hydrocarbon production. Currently industry estimates of fault permeability frequently range over several orders of magnitude for a single site and represent one of the greatest sources of uncertainty in risk assessments. The permeability of faults is governed by complex fully-coupled relationships between seismic (or aseismic) slip events, the fluid pressure field, mechanical properties of the host rock, and the geochemical environment. Quantification of these relationships and their effect on the temporal evolution of permeability has never been validated at the field scale.

Recent observations of microseismic activity beneath the Açu water reservoir in NE Brazil (above) provides an unprecedented insight into these processes and a basis for quantifying their inter-relationships. The earthquakes can be accurately located, they occur frequently on three well-monitored faults and there is a clear causal link with pressure diffusion from a well-monitored source.

The main aim of this research is to analyse these in combination with field studies of exhumed seismogenic faults and numerical hydro-mechanical modelling. This will allow us to develop the first field evidence-based conceptual and numerical models of simultaneous seismicity and permeability evolution in faults. There are five specific objectives of the research: Predicting the sealing potential of faults such as the Moab fault, Utah (pictured)is dependent on having detailed structural and petrophysical data on the character of the fault. Deformation band fault core has only recently been recognised as a distinct component of deformation band faults.

Aileen Bright's PhD research (funded by Enterprise Ireland) provided insights into the character, growth and sealing potential of faults in porous reservoir sandstones. The initial focus of the research was to describe the multiple components in the fault core of deformation band faults. Three previously unrecognised fault core components were described in detail: condensed deformation bands, minor slip surfaces and breccia. Petrophysical data (permeability and porosity) were collected to characterise each of the fault core components. Aileen then examined a range of fault growth stages from field sites in a wide range of host rock types and with a range of offsets (field areas in Permian and Jurassic aeolian and fluvial sandstones in Utah, Scotland and northern England).

The field studies allowed us to place new constraints on the timing and conditions of slip surface nucleation and fault core development with increasing offset (growth). Deformation band fault core is shown to be a potential conduit and/or barrier to fluid flow at different points along strike and under different conditions (e.g. fluid pressure, stress). Potential along-fault conduits are major slip surfaces (if open). Potential across fault conduits include breccia pods, joints, interconnected slip surfaces and fractures.

Analysis of leaky CO2reservoirs in the northern Paradox Basin, Utah, has allowed us to develop a model for the shallow subsurface flow of CO2. The results provide information on how CO2migrates and reacts with groundwater and reservoir rocks in the subsurface, and what the effects on surface environments are when CO2leaks to the surface.

A series of shallow fluvial and aeolian sandstone groundwater reservoirs are charged with CO2 which builds up in a north-plunging anticlinal trap with fault sealing on its southern margin. Top seal is provided by shale-rich formations, but fractures related to the fault damage zone provide conduits through the top seal. This geometry has resulted in a series of stacked reservoirs, and ultimately in escape of the natural CO2into the atmosphere. The CO2escapes through a series of springs and geysers along the faults, and through wellbores that have penetrated the reservoir. At the surface, rapid degassing of CO2 -charged groundwater results in the formation of travertine mounds around active springs. The presence of deeply incised ancient mounds attests to the long lifespan of this leaky system. There is no evidence of adverse effects of this leakage on wildlife or humans, and the springs provide (somewhat saline) water for plants in this high desert environment.

Studies on the effect of long-term leakage both in the subsurface and at the point of leakage to the surface provide data on factors that affect the safety and feasibility of future CO2injection projects. This should guide the design and implementation of geologic sequestration projects. This work formed the PhD ofBen Dockrill(2006, Trinity College, Dublin) and the masters projects of Jason Heath and Tony Williams (Utah State University). Ongoing research in this area is being conducted byNeil BurnsideandStuart Gilfillan.

Whilst geothermal gradients are relatively well constrained in sedimentary basins, it’s often assumed that due to the perceived low porosity and permeability of crystalline basement, fluid movements have little influence on the thermal structure of much of the shallow crust.

Dempster and Persano (2006) have demonstrated that virtually all the published thermal histories of cooling orogenic belts show patterns consistent with exceptionally low temperature geothermal gradients in the upper parts of the crust. This is interpreted as the shallow crust having much more rapid rates of heat transfer reflecting efficient heat transport by fluids. “Crystalline basement” should no longer be thought of as “impermeable basement”.

Firstly, on the scale of individual mountains we’re analysing vertical profiles of samples to attempt to constrain for the first time in detail palaeogeothermal gradients in an orogenic belt. Secondly, we’re investigating individual conduits for fluids in detail to study both the thermal influence of any fluid movement and the effect on the geochemistry, mineralogy and isotope geochemistry of the host lithologies.

These studies are being undertaken in the granitic basement lithologies of the Monte Rosa (pictured)and Mont Blanc massifs. In both places prominent fracture systems showing abundant petrological evidence of fluid flow are combined with superb levels of exposure and vertical relief in excess of 2000m allows for the collection of vertical profiles. The detailed relationships between movements on these fracture systems and the petrological effects of fluid flow are being investigated by Susan Lawther as part of her PhD research.