The physics behind some of nature’s most spectacular structures have been observed in an atomic gas at very low temperatures - less than a thousandth of a degree away from absolute zero - by a collaboration of researchers from the Optics Division and the Institut Non Linéaire de Nice in Sophia-Antipolis, France.

Complex Turing structures (similar to animal coat patterns) can emerge from the way natural systems organise themselves under the action of diffusion. We have shown that ultra-cold atomic vapours can self-organise under the action of laser light with reflective feedback. In a recently published Physical Review Letters (theory) and in Nature Photonics (experiments) we showed that, under the right conditions, the light and cold atoms arrange themselves to form beautiful hexagon and honeycomb patterns, respectively.

Self-organized structures of ultra-cold atoms and light may open up new possibilities for manipulating and structuring matter and could have an impact in various branches of physics, including quantum, nonlinear and condensed-matter physics. 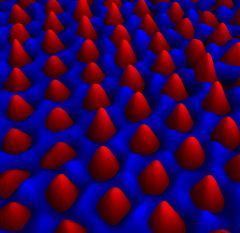 The scientists are investigating complex structures and patterns, which can emerge from the way natural systems organise themselves. Examples include cellular patterns formed by heated oil in frying pans – and hexagonal patterns on a giraffe’s skin, as well as the highly-sophisticated, laser-driven atomic samples being investigated in the Strathclyde and Nice laboratories.

The researchers are seeking to understand the way these structures arrange themselves spontaneously, by studying ultra-cold atomic vapours, and previously developed a theory predicting the conditions under which patterns should emerge.

They have now carried out further experiments which have shown that, under these conditions, the light and atoms arrange themselves to form striking hexagon and honeycomb patterns.

Professor Thorsten Ackemann, of Strathclyde's Department of Physics – and co-leader of the research, said: “We have been looking at self-organisation of cold atoms due to a process known as opto-mechanical coupling, which takes place between light and atoms.

“Laser-cooled atoms have typical average velocities of only 30 cm per second, a thousandth of the 300 m per second which is typical for atoms in hot vapours. As a result, forces exerted by a light field can more effectively influence the cold atoms' motion. These forces move the atoms which in turn control how the light is distributed, producing patterns in both the light and atom distributions.

“The experimental results demonstrate this novel type of cooperation between matter and light. They enable the self-organised manipulation of the density of matter itself, which is an intriguing and unusual feature."

Dr Guillaume Labeyrie, from the Institut Non Linéaire de Nice, said: “We have a particularly large magneto-optical trap of Rubidium atoms in our laboratory, which is a pre-requisite for studies of this kind. The patterns arise from a single pump beam and its retro-reflection and we observed spontaneous symmetry breaking.

“We then probed the atoms with a beam not experiencing feedback. We detected a long-lived structure demonstrating a structure in the density – atomic bunching – and not in the atomic excitations.

“In the future, we will be interested to extend the scheme to quantum degenerate systems such as Bose-Einstein condensates. We will also study classical and non-classical correlations and transport processes in these self-organised lattices.”

Dr Gordon Robb, of Strathclyde’s Department of Physics, said: “The idea of optomechanical patterns is not limited to cold atoms, but can be extended to ponderomotive forces in plasmas and to soft matter dielectric beads in suspensions. Here, applications in self-assembly might be more straightforward than for the atomic system.”

Dr Robin Kaiser, of the Institut Non Linéaire de Nice, said: “We are interested in exploring possible light matter interaction in astrophysical systems, where until now mainly radiation pressure forces have been considered."

The collaboration between the two groups was supported by the Royal Society. The research project was supported by the Leverhulme Trust, the Engineering and Physical Sciences Research Council, the Centre National de la Recherche Scientifique, the Université de Nice-Sophia Antipolis, and the region Provence-Alpes-Côte d'Azur