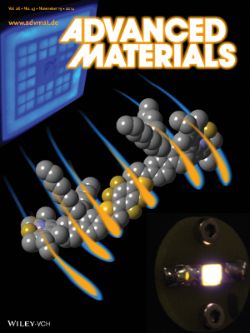 Strathclyde physics has been recognized for papers published in 2014. Some have been highlighted, highly cited, or else chosen to illustrate journals.

In their annual review of 2014, the New Journal of Physics highlighted two papers by Strathclyde physicists. The paper Discriminatory optical force for chiral molecules by Alison Yao and collaborators proposes new devices based upon a novel optical activity phenomenon than can help discriminate differently handed molecules. This would help distinguish between helpful and harmful versions of the same chemical, useful in academic, industrial, and medical applications. The paper Testing the effects of gravity and motion on quantum entanglement in space-based experiments by Daniel Oi and collaborators proposes using CubeSats and Bose-Einstein condensates to probe the relationship between quantum entanglement, gravity, and acceleration. This could lead to a better understanding of how these two seemingly incompatible theories can be reconciled.

The paper A 3-Gb/s Single-LED OFDM-Based Wireless VLC Link Using a Gallium Nitride by Jonathan McKendry, Erdan Gu, Martin Dawson and collaborators has been picking up many citations, more than 40 so far since appearing last year in IEEE Photonics Technology Letters. It is one of the journals most frequently downloaded papers.

Another paper highlighted as a top 10 physics breakthrough by Physics World was Turbulent amplification of magnetic fields in laboratory laser-produced shock waves by Bob Bingham and collaborators. It was hailed as "Supernovas in the lab" by the BBC.

And finally, but not least, the paper Light-Emitting Diodes: An Organic Down-Converting Material for White-Light Emission from Hybrid LEDs by Jochen Bruckbauer and Rob Martin was chosen for the inside back cover of the 19th November 2014 issue of Advanced Materials.