When the winning selection of 24 (from 150) experimental designs in this unusual challenge was made, those teams were invited to build then install their modest 'ShabbyShabbyApartments' around the city of Munich. Considering the range and quantity of international entries the Department is very proud of the achievement of Laura, Paulina and Kurt.

This is the story of a lost and found deserted but converted into a hotel room yellow submarine.... ﻿

The ﻿three students travelled to Munich to construct (in September 2015) their winning design - a Yellow Submarine.  Laura Petruskeviciute, Paulina Naruseviciute and Kurt Cleary had entered ﻿'ShabbyShabbyApartments 2015' an international  architectural competition open to design and architecture collectives from around the world. From over 150 entries their Yellow Submarine project was selected for the shortlist of 24 modest 'apartments' to be built in the city and then opened to the public as accommodation to be booked for a night's stay.

The Yellow submarine gets in the news

We were very disappointed to read that the yellow submarine had been the victim of an arson attack. Happily no-one was injured but this was a disappointing outcome for our team after all their hard work. Made from recycled bathtubs, the plan was that the public could rent the Yellow Submarine. It was located on the banks of a river in the pretty English Gardens in Munich. Their proposal was a modular eco - design which re-purposed free materials; disused bathtubs, old washing machine doors for porthole windows and pvc pipes for a periscope. They had project support from BAaD, Rock DCM, the GPO and MOBILELAND in order to share their talents in 'the great architectonic context of Munich'.﻿

The three are the original student leaders of the live build project called MOBILELAND, which aims to enliven communities by bringing mobile green spaces and art to vacant or under utilised land in Glasgow. Kurt is part of the Glasgow Project Office which brings creative people together to produce alternative architecture. Paulina and Laura started work as a team during a period of study in Berlin where they originated URBAN RESTART which continues to explore temporary use developments in Glasgow as part of their Master’s Theses. (See their cinema Pneumatica situated at the Barras). There are some fantastic photographs of the construction and installation of the wee submarine on the team's Facebook page: URBAN RESTART.

ShabbyShabbyApartments 2015 was an international live competition, to be based in Munich from from September 12th to October 13th. The organisers' challenge was,

To realize an experiment in Munich which shows a different view of the city with one of the top-ten-rents in Europe. What would happen if everyone left their homes and built booths at the most unlikely places in the city?﻿  As living in city centres is becoming increasingly expensive the competition challenge i to reinvent idea of temporary housing.  We invite designers to conceive compact dwellings for affordable living, a low cost design, use-what-you-find materials and with an infrastructure built from as few resources as possible.

The winning selection of 24 experimental designs was made and the teams invited to install their modest ShabbyShabbyApartment schemes around the city. Considering the range of competition in this scheme we are very proud of the achievement of Laura, Paulina and Kurt. 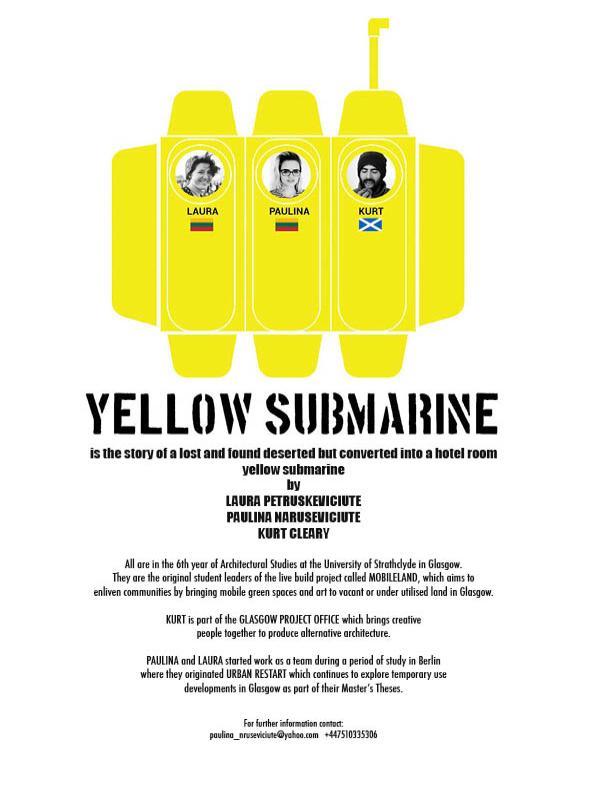